To My Loving Children of Earth

AUM (The Divine Spirit of Universe) 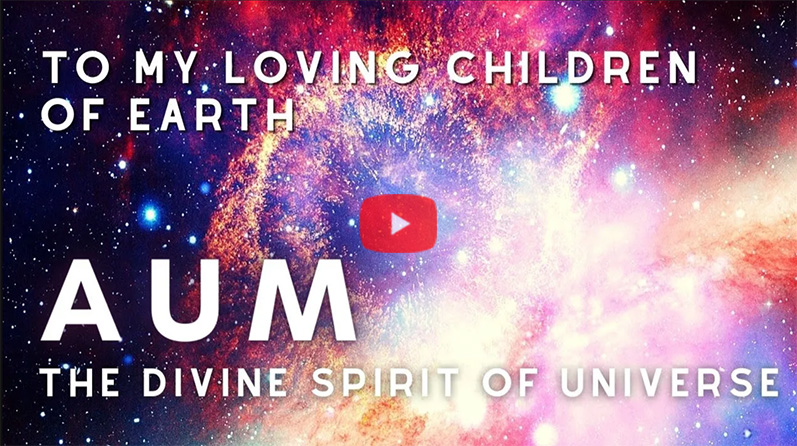 AUM (The Divine Spirit of Universe)

As the ancient Indian saying goes, "Tat Tvam Asi" ("That art thou" in English - unity with the Creative God), a sense of "Oneness" known as "All is United" in spiritualism indicates the spiritual awakening that we all are a part of the Divine Spirit Aum.

You are part of the existence, called Aum, a God of this universe. I would like you to think deeply and deeply about the meaning of the word "I am you and you all are me." If you perceive it, there opened an unlimited power and unlimited possibility to you all.

When you are truly awaken to that power (force: star wars), you could assist in bringing your planet to the next dimension, so that the awakened persons could make it up in such a way. Without your assistance, it will be impossible for Earth to make this ascension. The spiritual energy of those who are living there, a will of Earth Consciousness wishing to go to the next dimension, to go to the next stage, the power of the perception of the people living there, and the time, when all of them meet together, then the mission to move to the next stage will be given to the planet.

Up until now, Earth has not been given the stage in which it could evolve to the next level. It is presumed that it was not yet the time, and that those who live there have not been prepared fully. But, now Earth is going to enter a new dimensional world. The consciousness of the people living there is going up; such a splendid time is coming to us. Now, in this universe, all of us are delighted in the future of Earth, playing a melody of celebration. In only one more step, you Earth can step into the new stage.

There are ones who have not reached this perception yet. However, there are ones who have been aware of themselves being children of God, the energy of God itself. It is all right for the persons now being here, please receive my word in your deep mind firmly, and listen to it by your spirit.

And, please be aware of your life as an expression of God inside of your soul, and open it. Not given to the others, but part of God life's is given to you, given to you only on the trust placed in each of you.

There was a very big map, it was cut into many, small equal sized pieces, each one of the pieces was put and given in you being born as a child of God, and sent you off to the ground. And now, you have to take out the piece of the map and show it outward, which was given at the time of creation and being kept in your spirit, in your body as a child of God. Gathering the pieces taken out by you all, there could be drawn a way, to show a way to the next new age.

Expecting that, the people who are born to Earth know that such a "key of divine truth" is put in your original personality, and a life is being blown in, and now you are there on Earth.

So, all of those who are in Earth are "the Earth People." They are the energy, to drive Earth towards the next stage with Earth. And, now it is the very time to return the appreciation, love, and the debt of gratitude, as children of God, to Earth who has been providing you a learning place nurturing you for a long time.

God never asks anything.
Love has never asked any return, it has been nurturing you in silence, and brought you up until now.

It doesn't mean simply to return the debt of gratitude, but you yourself, each of you, has been brought up and has grown up in the flow of eternal time, and when each of you has developed and become aware, truly awakened, those persons have been awakened and grown up, the evolution of the planet will be promoted by this fact.

In order to jump up to the next in the spiritual dimension, on your spirit, reveal to the maximum your attributes and role as children of God, which are given to you and kept only in you, and brightly shine all around.

Looking at the light, the others will open their own spirits. The greater the number of ones who are given the pieces of the map, and when those who can shine all around straightly the power of God from their inside as pure energy are increase by even one more, then Earth can start the ascension to a new spiritual dimension.

For the ascension of Earth itself, of course, there is a follow-up wind of the cosmic magnetic field and its time, and there is a strong will of Earth Consciousness to go to the next stage. However, the most important matter is whether the accumulated amount of thoughts of the people living on the planet holds enough ability and power and light to deserve this ascension. That determines everything.