To My Beloved Children From Your Mother 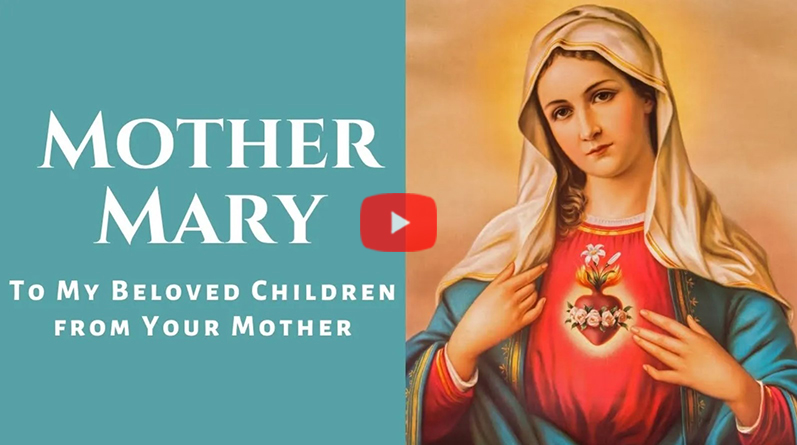 She was a devout person and was always depicted as an obedient woman in the Holly Bible. She has been respected as a paragon of virtue of women in the Christian religion until today.

She denies her the Virgin Birth of Jesus in her channeling, however her modest attitude with full of love trying to convey God's thoughts to people on Earth in her easy words is exactly the same as that described in the Holly Bible.

She appeared actually in several places as Fatima in Portugal, Lourdes in France and Akita in Japan and other places in the world, and tried to avoid the upcoming natural disasters in the end of the twentieth century and unstable world situation, by preaching the importance of repentance and the end of the world.

Since the Cold War ended and the natural disasters did not occur, her appearance was a story of the past. However, in Lemuria Renaissance channeling, she disclosed her messages were for the people today.

While I descended on this ground as a mother of Immanuel, Jesus Christ, there had not been any occasion I had been guiding people by the special power and word, or there has not been any sense of perception. Only I have been lapping him with the thought of love, and since I know his mission, his great mission, is going to be fulfilled someday, I had always been concentrating my heart on how I could raise him. I am just a very ordinary wife of a carpenter who lived in the countryside. There was no more than that. But if it could be connected to that which is God in heaven, the grand love, through such a role, I thought that I was going to accept and receive the role and fulfill it, and I have been taking the role of Mother Mary up until today.

As my last work, there have been appearances through the role of the Holy Mother of Christianity in Fatima and many other places, even in this Japan, Akita or other places. Through those appearances, I have told many people repeatedly, "Repent, repent. Go back to living under God. God is now crying," and "Repent of your heart and remove the hellish thought and go back to living under God. To our beloved children of God." But the result of this is that the twentieth century has ended while the faith has not been rooted in the people's heart, there has been no mind of repent, and the negative energy has won. You might not be aware of such a crisis yet. Numerous earthquakes happened in the land of Japan, and this time also a big tidal wave happened, an earthquake, in Indian Ocean. But this is just the beginning. I would like you to understand this. That which you are going to do is to extend even a little the understanding that there is the realm of God, the sense of value of the children of God, and the vibration of love. And that is going to save this ground in the end. Your efforts become the great salvation for the next people of the future, the earth people, and in the true sense you provide the existence of God to many people, and when it has become a faith based on the people's actual lives in the true sense with the power of comprehension, this earth would become a place that will not to be attacked by such a disaster.

I come here to convey to you that those who are not educated and ignorant even like me who can guide the people under the love are the apostles of God. Even if one does not know a sophisticated thing, God dwells in the thought of love. You do not forget this truth. The thought of love is to forgive each other and praise each other. And the thought of love, the fundamental law of love, the grand law of the universe; it is called God. Being directly connected to God, the love, we are going to live on.

We are getting the energy from the sun of the spiritual world, the sun of the heaven except for those who are in hell. Each one of us is given the love of God being the origin of the grand universe, the energy of love, and we have been made alive every day. Taking off the body, the only thing remaining in our heart is thoughts. Those who have no love in their thoughts are not allowed to enter the heaven. Conversely, love is everything. By that which everybody has the thought of love in the united view of God, many people can directly connect to each other and they are going to be able to connect to the original sun of the love of God in the heaven. This means that the children of God can emit the light as the children of God.

When many people lose their immediate family and are left in the difficult situation by this natural calamity might be the time in which to reach the people's mind as a golden opportunity to convey from where God's light is coming through and where we are going. Therefore, you do not discard the simple things, and with the maximum love and with the maximum kindness, infusing the overwhelming faith to God, you can convey its simple and beginning thing.

To my beloved children, I wish you would not be defeated by this trial, please. The angels are all shedding tears, knowing of your bitterness. In the same way as I have been shedding tears like this, I am shedding tears for your part, for your bitterness, because I know your bitterness and there is nothing I can do for you, because this is only thing I can do. So I would like you to keep going to the end, please. Because it is that time, the settlement of the spirit will occur by which many spirits are going to be taken up to heaven through the repeated natural calamities. As a guidepost understandable for them, I would like you to leave the means of guidepost, please. That which shines the spirit is that which is directly connected to the realm of God. Live in such a way so that this great torch you are raising high is declaring loudly, "Go this way, there is the realm of God," "Go to believe like this: you can go back to the realm of God," and "We are the children of God."